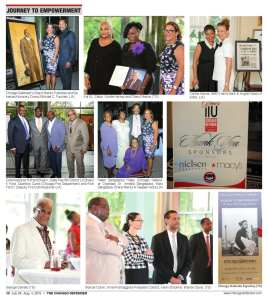 CHICAGO, Illinois – Mr. Michael C. Fountain, Bahamas Honorary Consul to Chicago, joined local and visiting Bahamians at the annual Bahamas Association picnic at Foster Beach, on Saturday, July 11, 2015, celebrating the 42nd anniversary of The Bahamas’ attainment of independence from Great Britain on July 10, 1973. The Bahamas Consulate Chicago helped sponsor the picnic, which is always held the second Saturday in July and has been a cornerstone event for local Bahamians in and around the city for decades. In the top photo from left to right are Mavis Simpson-Cargill, Jeffrey Crittenden, Donna Johnson, Honorary Consul Fountain, and Wayne Saunders, and in the second photo Honorary Consul Fountain is pictured with participants in the picnic.

CHICAGO, Illinois — Bahamas Honorary Consul to Chicago Michael C. Fountain was invited to attend a performance of April Yvette Thompson’s Liberty City at the eta Creative Arts Foundation, Chicago’s oldest African-American Theatre Production Company, on Sunday, June 28, 2015. Liberty City is the study of a child growing up in the inner-city ghetto of Miami during the 1970s. Specifically, it is about the special relationship between a daughter and the father, who taught her to understand and appreciate her African history through her Bahamian roots in Eleuthera. Pictured from left to right are Professor Jonathan Wilson, Director, Liberty City; Anna Dauzvardis, Actress; Dorothy Odell Foster, eta Board Member; Honorary Consul Fountain.

People on the Move

CHICAGO – Bahamas Honorary Consul to Chicago Michael C. Fountain attended the City of Chicago Inauguration Ceremony at the historic Chicago Theatre on Monday, May 18, 2015. He was accompanied by his wife Mrs. Tanya Fountain. Honorary Consul Fountain was invited as a member of the Chicago Consular Corps to represent The Bahamas as Mayor Rahm Emanuel was sworn in for his second term along with the City Clerk, Treasurer and 50 Aldermen elected to serve Chicago’s 77 communities and 2.7 million residents. Honorary Consul Fountain continues to strengthen his relationship with the Mayor’s office to better serve the needs of Bahamian residents living in the City of Chicago and outlying areas. In the photo above Mayor Emanuel (left) is pictured being sworn in by the Hon. Timothy Evans, Chief Judge of the Circuit Court of Cook County, as Mrs. Emanuel looks on. Honorary Consul Fountain and Mrs. Fountain are pictured in the photo below.

As a contributing sponsor, the Bahamas Consulate Chicago was asked to participate in the event’s Carnival of Nations, where Honorary Consul Fountain gave remarks regarding the celebration of Bahamian Independence and asked local Bahamians to register with his office.

The Caribbean International Festival of Life was founded as a vehicle to bring nations together promoting arts and humanities as well as providing a platform for people of the United States, Caribbean and Africa to connect through music, arts and crafts, clothing, traditional food and cultural exchange.