LONG ISLAND, Bahamas – The business community throughout the settlements of Long Island were among the hardest hit as a result of the devastation of Hurricane Joaquin.

A recent visit to the island provided members of the recently appointed National Disaster Reconstruction Committee an opportunity to inspect businesses, meet with owners, and see face-to-face the impact of the hurricane that ravaged the southern Bahamas in early October.

Committee chairman Nat Beneby said although residents have begun self-help efforts, the greatest opportunity that presently exists is to “jump start” businesses; and the solution to restoration is through public/private partnership.

“Unfortunately, a number of small and medium size businesses did not have hurricane insurance. With the loss of property, inventory and having to rebuild it’s very challenging. Progress is being made. In our discussions with business folks they have already begun that restoration slowly, on a small scale, but you can see some support is needed, he said.

“We will continue to collaborate with the National Emergency Management Agency (NEMA) and collectively see how best we can provide that support for the businesses in Long Island.”

According to Mr. Beneby, the direct responsibility of the NRRU is managing donations, government contributions and working with NEMA in having accountability, a transparent process and ensuring that reconstruction in the affected southern islands does happen andthings are restored to normalcy in a “quick” time.

He noted that an opportunity exists with companies, friends and supporters outside of The Bahamas,the United States in particular, who have expressed a desire to assist.

“They can make donations and receive tax exemptions through the vehicle called 501C. We understand that hundreds of thousands of dollars could be made available to us. Part of accessing that is for this committee to present an accounting and documented process so those persons could be satisfied that the accountability, monitoring, controls, disposition of funds are properly accounted for. Once they see that process, proper auditing and the paper trail in place they are open to helping us,” he said.

“That is one of the major sources of support we are going to be tapping into in short order. We understand also that there are lots of other private donations being directly made in self-help; any number of individuals and businesses providing support that we are aware of but those don’t come directly under the purview of this committee.”

The committee also plans to visit Acklins and Crooked Island and to get a first-hand assessment of the islands since the passage of Hurricane Joaquin.

Staff come together to help the Southern Islands

Nassau, Bahamas – CIBC FirstCaribbean staff across the country have joined together to donate three palettes of much needed supplies to the National Emergency Management Agency’s Hurricane Joaquin Relief efforts.

“We were moved by the tragedy that happened in the Southern Islands after Hurricane Joaquin and wanted to support in whatever way we could,” said CIBC FirstCaribbean Director of Human Resources Antionette Turnquest. “This was a collective effort; our branches and staff members really took this to heart and were passionate in their drive to provide supplies to the residents of the stricken islands.”

She continued, “We hope that the canned foods, cleaning supplies, and cases of water we have donated will help to bring a little relief and hope to those who have lost so much. After all, this is our country and our people regardless of whether we have branches in those islands.”

Four Representatives from CIBC FirstCaribbean branches and units presented the supplies to Richard McCombe, Senior Manager of Operations & Facilities at Arawak Port Development Company, and Don Gray, Director of Logistics at the Ministry of Finance, who are facilitating the logistics and transportation of the supplies.

Richard McCombe, said, “As the disaster turns from an emergency to helping people survive comfortably we get into a rebuilding phase and the question becomes what do people need most, like water, food supplies, building materials, and tarps. These donations from CIBC FirstCaribbean may go out to the islands within two days, as we help the islands not just rebuild their homes, but rebuild industry and their livelihoods. We are constantly assessing and evaluating the needs of the islands affected and we are putting these donations to good use.”

New Homes on the Horizon for Hurricane Devastated Islands

LONG ISLAND, The Bahamas – Approximately 60 new one-, two- and three- bedroom homes are on the drawing board for residents in the southeast islands wiped out as a result of Hurricane Joaquin.

According to Jack Thompson, administrator of the Government’s recently- formed National Recovery and Reconstruction Unit (NRRU), the second phase is construction of new homes.

“While the priority is to deal with roof repairs and eventually a lesser extent windows, doors, sheet rock, we will move in short order to new homes. We’ve identified approximately 56 homes in the islands which were totally destroyed or which make no sense putting in capital for. We’ve identified the plans, the persons and the material listing,” he stated.

The priority list includes homes for widowers, single mothers, senior citizens, the disabled and the indigent.

Mr. Thompson summed up the results of a fact-finding visit to Long Island and San Salvador, Sunday November 29, as “extremely productive.”

The administrator headed a delegation to Long Island and San Salvador comprising Captain Stephen Russell, Director of the National Emergency Management Agency (NEMA), and the National Disaster Finance Committee, recently appointed by Prime Minister Perry Christie, which includes Chairman Nat Beneby, Gowan Bowe, Mike Maura, Tracey Knowles and Jean Chalpon. The committee is charged with fundraising; targeting the private community to ensure that systems and processes are in place for the expenditure of the Donation Fund Account.

In addition to inspecting distribution centres, businesses and homes, the delegation got a first-hand look at infrastructure including roads, docks, schools, administration offices and other government buildings. They also chatted with fishermen other members of the business community, the islands’ Administrators and members of the Defence Force stationed in the islands.

“They are looking at the extent of the devastation, to critique and evaluate the processes, make recommendations and to tweak them to have a more effective system.

“We are going to be asking for more funds but people are only inclined to give money if they are satisfied that monies are being spent properly, the supplies are being distributed in an equitable way and given to the persons who are most in need.”

Mr. Thompson said there is no written or prepared text on how to deal with a Category 4 hurricane, but the intention is to ensure that processes are put in place to cause relief as early as possible for the maximum number of residents.

“Our strategy is to do all we can as quickly as possible for the people,” he added.

Infrastructural development is a part of the NRRU’s remit, and scopes of work have already been completed for the airport, road works and government buildings (with the exception of schools). However, Mr. Thompson said his committee plans to look beyond construction and also focus on the fishing community.

“Although you repair homes, if you don’t get people’s economic lives back in order you’re still missing a big point.”

In an effort to keep the public aware of its efforts, the NRRU will make available reports and statements. (BIS Photos/Patrick Hanna)

Atlantis donated $50,000 to the Bahamas Red Cross for Hurricane Relief

Atlantis, Paradise Island prides itself on not just being able to provide quality customer service, attractions and amenities to the guests that come to stay each year, but also on its commitment to the local community. In an effort to support the Family Islands in the southern Bahamas that were devastated by Hurricane Joaquin, the mega-resort property donated in excess of $50,000 to The Bahamas Red Cross along with three 40ft containers of lumber to assist with the rebuilding and restoration of homes damaged during the storm.
Atlantis President & Managing Director Paul Burke, accompanied by Senior Vice President of Public Affairs and Retail at the resort Ed Fields, presented the cheque totaling $52,343 to Bahamas Red Cross President Craig Tony Gomez. In making the presentation, both Burke and Fields said answering the call to help was a no-brainer for a company that has always been in tune with the Bahamian community.

“In response to the devastation that recent Hurricane Joaquin left in its wake in the southern islands of The Bahamas, Atlantis – with Brookfield Hospitality at the helm – initiated several relief efforts including a challenge to our employees and guests to generously donate to the cause and we as a company would match the amount raised. Through that effort, $23,583.51 was raised.

CHICAGO, Illinois – Mr. Michael C. Fountain, Bahamas Honorary Consul to Chicago, joined local and visiting Bahamians at the annual Bahamas Association picnic at Foster Beach, on Saturday, July 11, 2015, celebrating the 42nd anniversary of The Bahamas’ attainment of independence from Great Britain on July 10, 1973. The Bahamas Consulate Chicago helped sponsor the picnic, which is always held the second Saturday in July and has been a cornerstone event for local Bahamians in and around the city for decades. In the top photo from left to right are Mavis Simpson-Cargill, Jeffrey Crittenden, Donna Johnson, Honorary Consul Fountain, and Wayne Saunders, and in the second photo Honorary Consul Fountain is pictured with participants in the picnic. 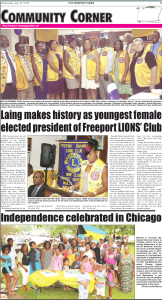 CHICAGO, Illinois — Bahamas Honorary Consul to Chicago Michael C. Fountain was invited to attend a performance of April Yvette Thompson’s Liberty City at the eta Creative Arts Foundation, Chicago’s oldest African-American Theatre Production Company, on Sunday, June 28, 2015. Liberty City is the study of a child growing up in the inner-city ghetto of Miami during the 1970s. Specifically, it is about the special relationship between a daughter and the father, who taught her to understand and appreciate her African history through her Bahamian roots in Eleuthera. Pictured from left to right are Professor Jonathan Wilson, Director, Liberty City; Anna Dauzvardis, Actress; Dorothy Odell Foster, eta Board Member; Honorary Consul Fountain.